Please note that this is general information & may not be relevant to your particular matter. This toolkit should not be taken as legal advice.

When applying for a new job it is important to understand exactly what type of employment relationship you may be entering. There can be serious legal consequences if the employment relationship is incorrectly labelled. For example, some job advertisements might state the position available is for an independent contractor when the true nature of the position is really an employee. Independent contractors and employees have different obligations and rights in relation to the work they perform. It is important to know the difference between the two so you can ensure you are receiving all your legal entitlements and that you are complying with any legal obligations.

What’s the difference between an independent contractor and an employee?

There are a number of factors that assist in determining the difference between an employee and an independent contractor. In general:

Independent Contractors work for themselves and are their own boss. They set their own fee for the work that they perform and have control of when and how they work. They usually create and supply invoices to receive payment for their work based on the completion of a job. Independent contractors arrange and pay their own taxation and are required to have an Australian Business Number (ABN).

Employees work for someone else and are not running their own business. The employer controls how, where, and when the employee does their work. Employees are often paid by the hour and receive a wage or salary. Employees are not required to pay their own taxation and their employer will deduct taxation and pay it to the Australian Taxation Office (ATO). Employees are entitled to certain types of leave (i.e. long service and parental leave) and superannuation.

Sometimes the true nature of the relationship will be obvious but sometimes a more fulsome analysis of all the circumstances of the working relationship is required.

It is important to note that no single indicator can determine if a person is a contractor or an employee. Each assessment is based on the individual circumstances of the work arrangement in place. Courts always look at the totality of the relationship between the parties when determining the status of a person’s working relationship.

What is sham contracting?

It is illegal for employers to misrepresent an employee as an independent contractor. Sham contracting is against the law and there are protections for workers who find themselves in sham arrangements.

For example, it is unlawful for an employer to:

Sham contracting is sometimes done on purpose or an employer may have acted carelessly and not fully understood their obligations at law. Sham arrangements are sometimes set up by employers who are trying to avoid responsibility for paying legal entitlements due to employees such as annual leave or superannuation.

How can you spot a sham contract in a job advertisement?

Have a look at the advertisement for a job below. It is not uncommon to find advertisements for jobs online that have some of these features. The advertisement below is problematic because it has features of a sham contracting arrangement. 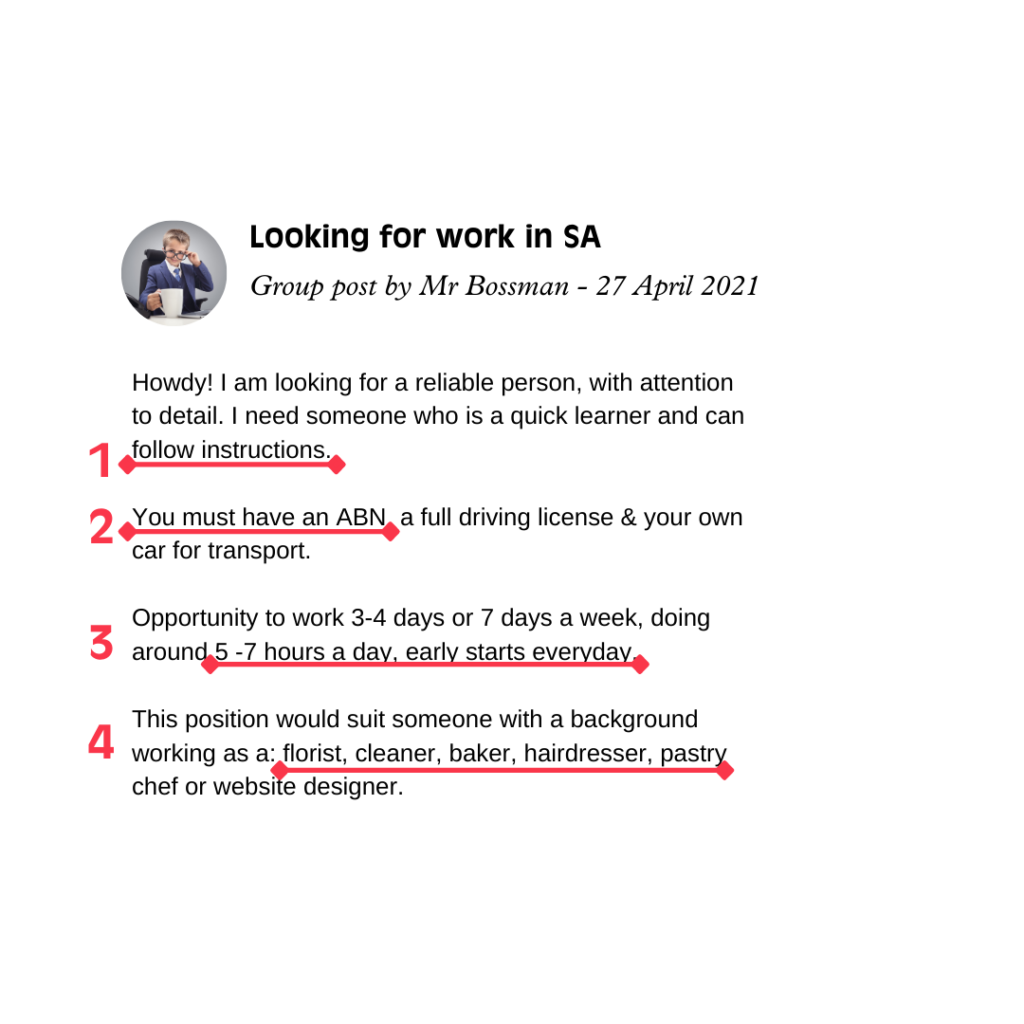 It is unlawful for an employer to pretend that they are offering a person a job as an independent contractor when the position actually involves entering into an employment contract. Before accepting a position like this, you should ask more questions about the true nature of the position and get some advice.

Have a read through these case studies for further guidance on how to spot a sham contracting arrangement:

Stevie was offered a job in a beauty salon as a Beauty Therapist. Stevie is qualified to provide a full range of beauty treatments. Stevie was told she needed an ABN and would need to arrange to pay her own tax. Stevie was told she would be paid $25 per hour and would be given four shifts per week. Her shift times were in line with the salon’s opening hours which were 9am to 5:30pm. She was given a uniform with the Beauty Salon’s logo which she was required to wear. Stevie was told to book and perform nail treatments only. The beauty salon owner told her she would need to bring in her own customers and generate patronage.

Stevie is an employee. She has no control over where, when and how she worked. Even though she was told she needed an ABN and was required to pay her own tax, she was not running her own business and had no control over her work. Stevie may be entitled to a higher rate or pay and superannuation.

Asma is an Electrician and performs work on a residential building site for a large building company called BuildPro. BuildPro engages Asma to wire the new house they have built. Asma gives Buildpro a quote for the job and says she will invoice BuildPro when the work is complete. BuildPro asks Asma to finish the job in three months. The job is too big for Asma to complete alone so she engages another worker to do the job with her. Asma has an ABN and has undertaken to work six days per week from 7am to 3pm to get the job finished.

Asma is an independent contractor. She determined her fee for the work and invoiced BuildPro accordingly. Although BuildPro requested the work be done within three months, Asma was able to determine her hours of work and was able to employ someone else to delegate work to. Asma is running her own business and had control over many aspects of the job which all indicate she was an independent contractor.

Please note that this is general information and may not be relevant to your particular matter. This should not be taken as legal advice.  National Employment Standards   The National...

Workplace 101: What are the different types of employment in Australia

Please note that this is general information & may not be relevant to your particular matter. This should not be taken as legal advice    Different types of employment...