This is a reckoning’: Women march for justice in Adelaide

Thousands of people wearing black and brandishing signs have filled Victoria Square and marched down King William Street as part of a nationwide protest calling for an end to sexual harassment and gendered violence in workplaces. 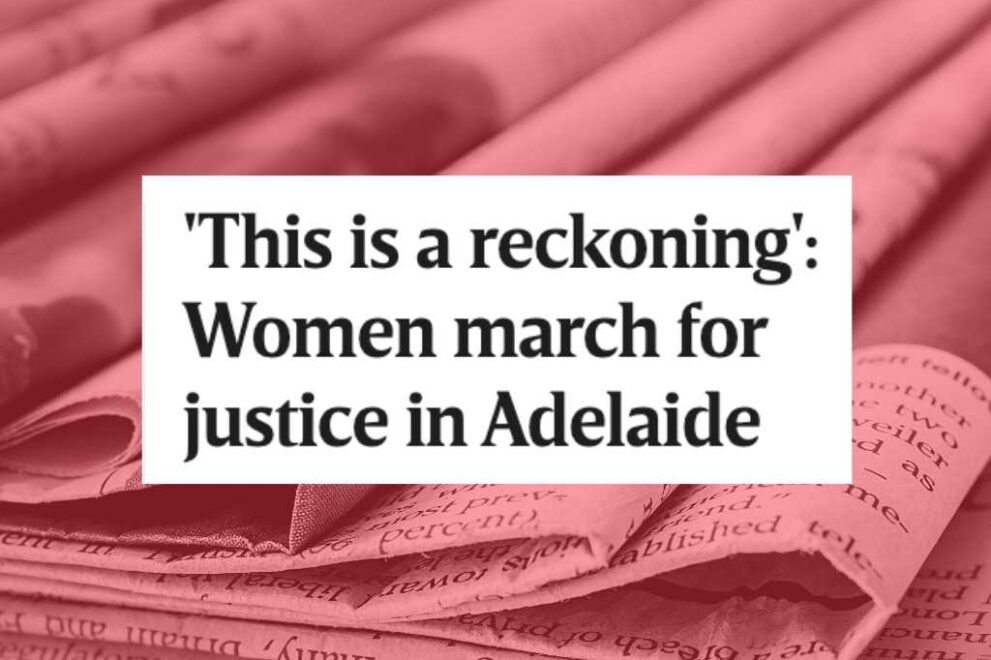 This interview was published by InDaily Monday March 15 2021

The crowd of mostly women gathered on the steps of Victoria Square to the sound of John Farnham’s You’re The Voice with placards warning “I’m angry”, “enough is enough”, “no Porter in the house” and “we believe you Brittany”.

They then marched down King William Street towards Parliament House chanting “justice for women now” and “we will not be silenced”, before heading back to Victoria Square.

The inaugural Adelaide March4Justice event, which started at noon, coincided with 35 protests across Australia, including in every capital city and many regional centres.

The protests supported a national march in Canberra, where a petition was delivered calling on Prime Minister Scott Morrison to act on gendered violence against women, including female Members of Parliament and staff.

The Adelaide protestors joined an estimated 100,000 people across the country calling for independent investigations into all cases of sexual harassment and assault.

“Women are silenced about these things – they don’t often speak up and tell their friends and family because they actually fear the consequences,” she said.

“We have already seen that with some of the national cases where women have lost their jobs.”

Barrister Claire O’Connor SC said she was the victim of violence and harassment in her workplace.

“Enough is enough of the culture of not listening, not acting and blaming. That’s why we’re here.”

She told InDaily that today was a “crucial moment for women in this country”.

“That’s an incredible thing – I’ve never actually witnessed something like this before and it’s a credit to Brittany Higgins and all the women who have stood up and said something.”

Potter said she hoped today would be “the beginning of an era where women will start calling assault and harassment out”.

Today is not the start of the social movement, but it is the start of a new notion and a new movement in Australia

She said there was was “no way” that politicians could ignore the protests happening across the country.

“They’re doing a very good job of trying to – particularly in not attending the march and I’m hoping there will be a minute to midnight change for government MPs, particularly for Coalition women to attend the march,” she said.

“I do feel like there’s no way but forward now.

SA Working Women’s Centre director Abbey Kendall said women sought support from the centre “every single day who have either been raped, sexually assaulted or sexually harassed in the workplace”.

“It is happening all over the country in all types of workplaces: small, large, private and public,” she said.

“This is a reckoning.

“Today is not the start of the social movement, but it is the start of a new notion and a new movement in Australia.

“Nothing will stop this movement.”

“Our women have been fighting the colonial white men from the day of colonisation,” she said.

“Our women have been raped, they have been taken and stolen and made as sex slaves since colonisation.

“We all need a change as women because this man’s law that we live under, it doesn’t work for any of us.”

One protestor, who InDaily has chosen not to name, held a sign that read: “Hear me rage. Justice for rape victims”.

“I’ve been raped and sexually abused four times in my life,” she said.

“I’ve reported it to police on four different occasions and… I haven’t taken it to court because of the damage it will do to me and my family.

“I haven’t been able to let out my rage and this is about me settling into my power and rage.”

The protests come as the Morrison Government is rocked by the alleged rape of former Liberal staffer Brittany Higgins by a colleague.

It is also under a cloud over rape allegations dating back to 1988 levelled at Attorney-General Christian Porter, which he strongly denies.

Porter, who has the support of Morrison, this morning launched defamation action against the ABC and journalist Louise Milligan for reporting “false accusations” against him in relation to the alleged historical rape.

Morrison remains under sustained pressure as he continues to insist police have dealt with the historical allegations and no further action is required.

He was also criticised this morning by the national founder of the Women’s March4Justice movement, Janine Hendry, who rejected an offer from his office to meet behind closed doors.

Morrison had invited up to four march delegates to meet with him and Minister for Women Marise Payne after the rally.

Payne, who did not intend to be at the demonstration, also offered a separate meeting.

But the organisers said they wanted Morrison to attend the rally in person.

“We have already come to the front door, now it’s up to the government to cross the threshold and come to us,” Hendry said this morning.

“We will not be meeting behind closed doors.”

Morrison refused to attend the protest, but about 15 coalition MPs and senators went outside to hear the speeches.

Higgins spoke at the Canberra rally outside Parliament House to demand urgent action from Australia’s leaders and to accuse senior politicians of dodging accountability.

The former Liberal staffer, who alleges she was raped by a colleague in a ministerial office in 2019, made a rousing speech to thousands of people at the Canberra March4Justice.

“We fundamentally recognise the system is broken,” she said.

“The glass ceiling is still in place and there are significant failings in the power structures within our institutions.

“We are here because it’s unfathomable that we are still having to fight the same, stale, tired fight.”

Higgins quit her job as a media adviser and went public hoping she could protect other women from traumatic workplace incidents.

She spent recent weeks in a spare bedroom in her father’s Gold Coast apartment watching the news around her play out.

“I watched as the prime minister of Australia publicly apologised to me through the media, while privately his media team actively undermined and discredited my loved ones,” she said.

Higgins was waking to new information about the alleged assault which has haunted her.

“I watched as people hid behind throwaway phrases like ‘due process’ and ‘presumption of innocence’ while failing to acknowledge how the justice system is notoriously stacked against victims of sexual crime.”

Many opposition politicians fronted the media this morning calling for change in their own party and within the Parliament.

“Wherever I go, I’m stopped by women, by girls, by men as well, saying that they’ve just had enough,” Labor frontbencher Tanya Plibersek told reporters.

“I’m very concerned, too, that despite all of the efforts that have been made by so many people over so many years change is too slow,” she said.

Morrison said he march was a “triumph of democracy”.

“Not far from here such marches, even now, are being met with bullets, but not here in this country,” he said.

Morrison’s speech fired up Labor leader Anthony Albanese who had attended the rally with a strong contingent of party colleagues, along with the Greens and independents.

“What I saw outside was passionate women who are angry,” he said.

The national March4Justice movement called for:

South Australian protestors have also called for Aboriginal women and girls to be offered sufficient welfare payments to meet the cost of living, as well as investments into local job creation to support the employment of First Nations women in regional and remote areas.