Wage theft extends to the non-payment of base wages, penalty rates, superannuation, loadings, and the non-payment of entitlements that workers should be receiving by law. In some sectors of the economy, wage theft has transitioned from a fringe activity to a business model.
This is an issue for workers and the government. In fact, the South Australian Parliamentary Wage Theft Interim Report confirms what we already knew: wage theft is rife in South Australia and it affects the most vulnerable workers in our community.
We gave evidence to the Wage Theft Inquiry about one of our clients who was only paid $14 an hour. How can you live on $14 an hour? You can’t. It isn’t a living wage.
In response to the Interim Report, we are holding a community discussion about the prevalence of wage theft to kick start South Australia’s response to this issue. Your rights at work: Free Training for International students

We recognise that many international students are working casually, often well below the minimum wage and can be at greater risk of exploitation by their employer.

We also know that as the South Australian economy opens up, there will be greater competition for jobs and employers trying to cut corners.
Our team of experts will leave you with a better understanding of the Australian workplace laws and some ideas about how to address unfair treatment in your own workplace.

The webinar will help answer some of your questions such as:

What are my basic workplace entitlements?

What should I expect from my employer?

I am being underpaid, what do I do?

What rules does my employer have to follow? What about me?

Where can I get more information?

I have been working more than 20 hours a week, can I still complain? These sorts of claims elicit many questions;

Is this a positive change?

Does WFH finally give women the flexibility we have been fighting for?

How do we navigate WFH when our own home is not safe?

What about work, health and safety? What about the costs of running a home office?

Will WFH be optional in the future? Should it be? Will more time in the home, increase our care work?

What types of workers get to WFH? Do you have to let your employer into your home? Will work hours increase? What on earth are we doing about childcare?
There are no simple answers, and as always it depends; not every person has the opportunity to WFH or experiences WFH equally. Can we re-imagine work, so that is works for us?
To keep this conversation going and maybe answer some of these questions, the Working Women’s Centre SA Inc is proud to host:

Working from Home: Risks and Rewards: An online panel conversation about gender and labour, while working from & in the home. 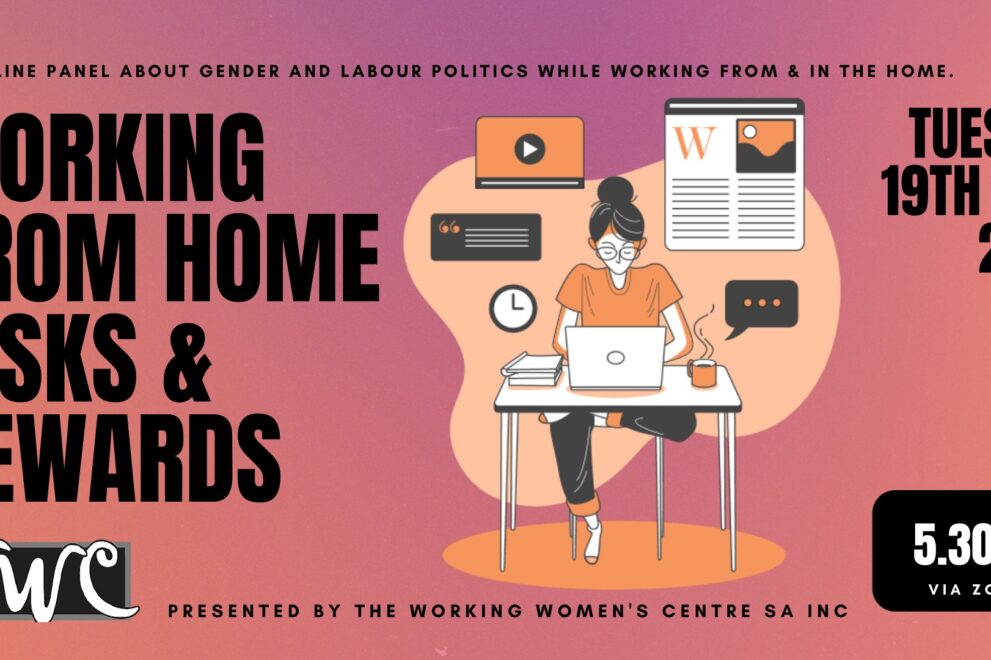 Young workers and sexual harassment – what are my rights?

Resigning from your job